Cute cats could be key to learning new languages

I found this cool article on the BBC’s site:

Amusing photos of cats may provide hours of entertainment for people browsing online but can they be used to help people remember things?

Funny cat photos and videos have become an online fascination in the last few years and have even created “superstars” like Grumpy Cat and Nyan Cat. One is a real-life miserable-looking moggy who has more than 2.5 million Facebook fans; the other is an animated kitten whose rather unimaginative journey across a screen has been viewed more than 100 million times.

Now, one app developer thinks it can tap in to this trend and use cute cat photos to improve people’s memory function when learning languages

Memrise analysed data to see what helped their members retain information. The company discovered an interesting link between the funny photos and people being able to recall phrases. The team studied the results of memory tests to work out which photos worked best.

“We wanted to know what kinds of visual mnemonics were most effective at helping people to learn fast,” says Ben Whately, chief operating officer at Memrise.

“The pattern began to emerge that pictures of cats always featured disproportionately among the most effective,” he says.

Using this research, the company developed CatAcademy, an app that shows photos of cats in humorous poses and displays a corresponding phrase in Spanish.

These cats are helping people to learn languages

The company cites research from Japan, which describes the relationship between cuteness and improved cognitive function, to explain why this method is so successful.

Ed Cooke, is the co-founder of Memrise and in 2004 became a Grand Master of Memory. To win this title he had to memorise 1,000 digits in an hour, 10 randomly shuffled decks of cards in one hour, and be able to memorise one deck of cards in two minutes or less.

“It’s quite a boring process learning lots of information but the art of memory is the art of using information,” he tells the BBC. 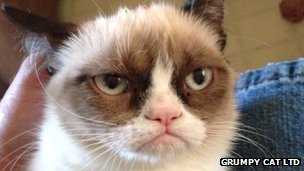 “We learn through interesting imagery. You use your imagination in a powerful fashion.”

The company has been providing language learning applications for three years and claims to have helped more than a million members pick up new linguistic skills. Their products already use images to teach but this is the first time that only cats have been used.

“The most popular [images] on our site were cats. We put this down to the internet’s obsession with them but what we found is that a cat’s cuteness means you really pay attention,” says Mr Cooke.

The team at Memrise crowdsourced the photos for the app and decided to advertise for the post of Director of Cat Meme Creation. They listed all 1,000 phrases they were looking to illustrate, on Tumblr, and asked people to upload their funniest photos. There was certainly plenty of choice.

The last few years has seen the rise of the cat-meme, funny images posted online with an accompanying phrase. Whole websites have developed dedicated to these funny feline photos. icanhascheezburger is one of the biggest with more than 40 million hits a month.

“For the past 10,000 years we’ve been biologically engineering cats to be weapons of mass cuteness,” chief executive Ben Huh tells the BBC.

“[They] are more complex and expressive than dogs, so they have remained the king of the internet.”

Mr Whately says the popularity of these sites got the developers thinking.

“How can we use [people’s] internet obsession with cats? That’s what technology should be asking, and taking advantage of it to help people learn,” says Mr Whately. 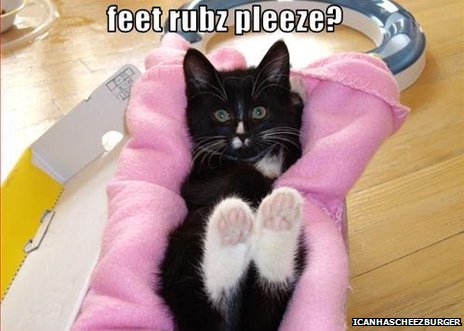 But will apps like CatAcademy really make a difference to the way people learn?

The more visual the impact and the less it is surrounded by words the more effective it will be as a learning tool says educational psychologist Barry Bourne.

“It should be simple and not too complex.”

“Humour and visual impact are important, they’re the ideal combination. Looking around at things I see on the internet and in adverts they are arresting people’s attention.”

It may be that the internet cat-meme craze is entering its next phase as a tool for providing more than just laughs.

Ed Cooke certainly believes that this is the case and has high hopes for future apps.

“The utopian scenario is that we develop a way of learning languages that works and is authentically hilarious,” he says.

Cute cats = learning makes perfect sense to me. Cats teach us so much already!